After temporary credentials have been issued, your device will be able to securely access AWS services such as Amazon S3, without having to install credentials on the device beforehand. Moreover, credentials issued by Cognito through Krypton are valid for any network connection, allowing you to utilize ethernet or Wifi as a primary backhaul, and utilize the Soracom Air cellular connection as a backup.

In order to enable Amazon Cognito integration, your AWS account must be configured to provide Krypton with programmatic access to Amazon Cognito. This process only needs to be performed once, and involves the following steps:

Once the identity pool has been created, Amazon Cognito will display its details. Make a note of the Identity pool ID, as it is required when configuring Krypton. 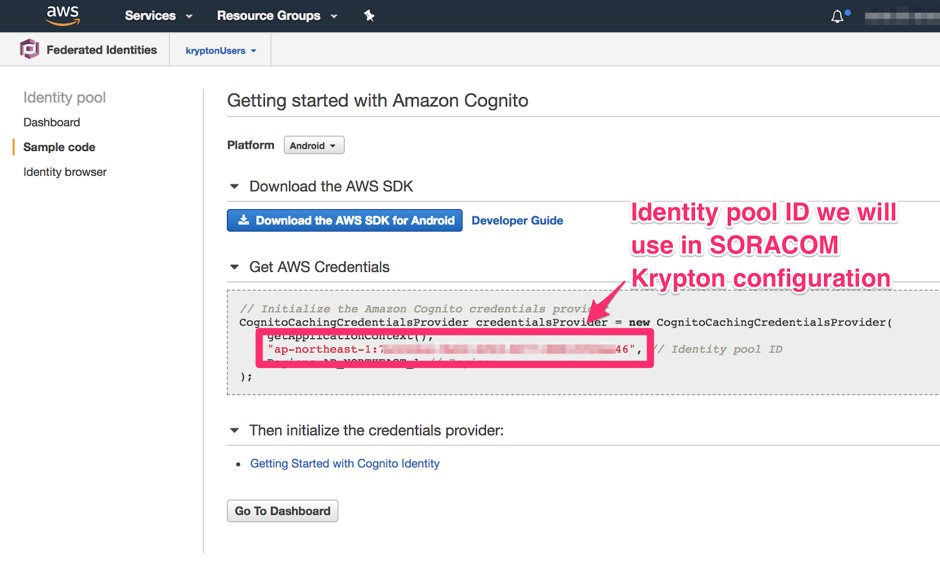 Our IAM user reqiures permission in order to utilize Cognito. This permission is provided by an AWS policy, which we will attach to our user:

Once the new user has been created, it will appear along with its Access key ID and Secret access key. Save these keys in a secure location.

Once your AWS account has been configured using the above steps, you will have the following information:

You can then use this information to configure Krypton using the Krypton Configuration documentation, following the instructions for integrating Krypton with Amazon Cognito.

Once Krypton has been configured, your devices can begin using Krypton's provisioning service.

Download the Krypton Example Project for NodeJS to your device and extract it. This will create a /kryptonExamples directory containing an cognito-auth.js NodeJS project file.

The cognito-auth.js file expects a krypton-cognito script which will perform device authentication. Our example project includes the following authentication scripts:

Let's make a symlink for one of these scripts:

If using Air authentication, ensure that your modem is connected.

If using Endorse authentication, you will also need to download and extract the corresponding Krypton Client to the same /kryptonExamples directory. Refer to the Krypton Overview documentation and Krypton Client repositories for installation requirements and instructions.

As the script runs, it will perform the following:

Once the device has received credentials from Amazon Cognito, the NodeJS script will output Successfully obtained AWS credentials. You can also verify that the subscriber IMSI appears in in the Cognito identity pool by using the Amazon Cognito Identity Browser. 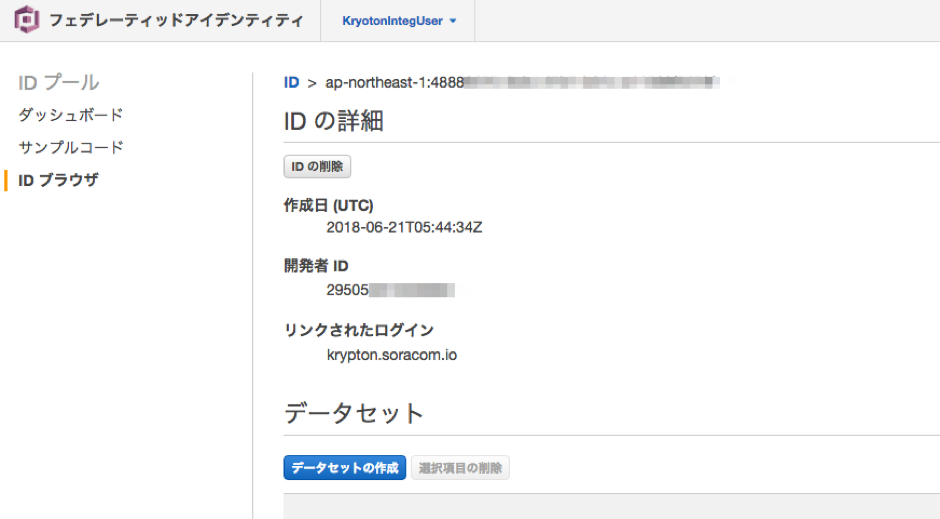 The cognito-auth.js script can be quickly modified to begin accessing AWS resources using the temporary credentials provided through Soracom Krypton and Amazon Cognito.

Make sure to replace my-s3-bucket with the name of your bucket. The IAM role attached to the device must also have the appropriate AWS policy for accessing S3 resources. Then simply re-run the script from your device to test that your device can successfully retrieve the list of objects.